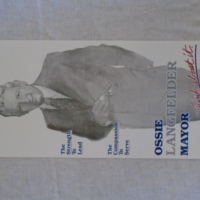 Ossie Langfelder served two terms as mayor of Springfield, Illinois from 1987-1995. Langfelder, won election as the Democratic candidate in the election of 1987, as the first mayor under the current form of government. Born in 1926, the Langfelder family escaped Austria when Hitler invaded in 1938. The family moved first to the United Kingdom, before settling in the United States in 1940.  Langfelder served in the US Army at the close of World War Two, as well as during the occupation of Japan. In Springfield, Langfelder worked as an engineer, before serving as Streets Commissioner and then Mayor.

This collection brings together pieces of the past, important to the service of Ossie Langfelder to Springfield, Illinois. Included in this collection are promotional materials for the campaigns, shirts, stickers as well as a pen. Also a part of this collection are scans of letters and documents related to Langfelder as well as a caricature of Ossie. During Langfelder’s first campaign for mayor in 1986 the first item of the collection was produced in order to promote key issues that Langfelder wanted to highlight. Second item in the collection is the newspaper headline from the re-election victory. After his time in office Langfelder continued to be a powerful force in Springfield politics, and he was often sought out for endorsements and photographs. The third and fourth items in the exhibit relate to Langfelder’s continued political influence in Springfield during the years after he left the mayor’s office. The final section of the exhibit collects examples of the ways that the Langfelder campaigns used material culture to connect to the public. Shirts, pins, stickers, and other items were produced by the campaigns in order to be effective connecting the candidate to the people of Springfield. Ultimately these items were effective as Langfelder won two elections for mayor.

The items in this exhibit were brought in by the Langfelder family, memories of their father and his service to the people of Springfield, Illinois.