Before Roots America’s history books silenced and marginalized the trials, tribulations, contributions and achievements of African American’s to America’s very being. However, Roots changed the trajectory of American history. The book version of Roots by Alex Haley came out in 1976 and the movie aired in 1977. The movie captured America’s attention for the full six or seven days it aired. Alex Haley’s book Roots inspired millions of Americans to research, reexamine, reflect and rewrite a history that tells a truer narrative of America.
The cover is symbolic of the depth of the soil, and the earth tones. Yet, the cover reflects strength in the bold letters that are linked together, which represents the bonds that connects us all to the human race. 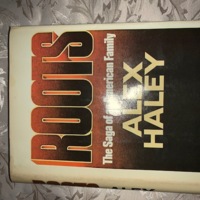