Set of “Kennedy Kards” political deck by Humor House, Inc., featuring gently satirical portrayals of the Kennedy clan. It was made in 1963, prior to President Kennedy's assassination, but not published until after his death. In addition to JFK, the court cards depict Bobby, Teddy, Papa Joe, the wives (Jackie, Ethel, Joan, Rose), Peter Lawford, and LBJ. JFK is depicted on the King of Hearts, the King of Diamonds, and the Ace of Spades.

The deck has 52 suited cards, plus 1 Joker (the Democratic Party donkey!), plus an extra card. The cards are bridge size, measuring 90mm x 58mm. 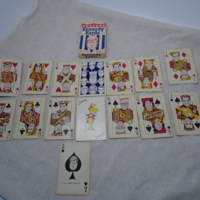