"Nixon Now" was a campaign slogan from Richard Nixon's run for president in 1972. He had a campaign song with a similar chorus. This button includes a union stamp on the back.

The striped button is a replica of the Uptown People's Coalition buttons from the 1960s. This was a radical, multiracial movement in Chicago that conjoined several political movements within the city. It was acquired in 2012.

The last pin, in the shape of Oklahoma, is from Barack Obama's successful campaign for president in 2008. 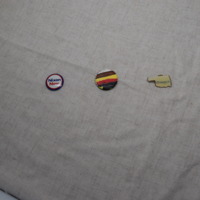