The photo was taken in 1979 when Gary Hannig was first elected as a Democratic member of the Illinois House of Representatives. He would go on to represent the 98th District until 2009. He resigned his position when Governor Pat Quinn appointed him to be Director of the Illinois Department of Transportation. In District 98, Gary Hannig was succeeded by his wife, Betsy Hannig.

The photograph was brought in by Greg Hannig, Gary's younger brother.

Photograph of Gary Hannig when he was first elected as State Representative in 1979. 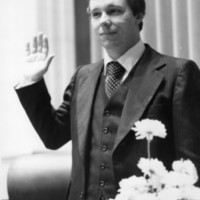