The flyer advertises Mike Frerichs as State Senator for the 52nd district in the 2010 Illinois elections. The Democrat held the office since 2006 and won 2010 with a margin of 12'000 votes against Repulican candidate Al Reynolds. Rerichs currently serves as Treasurer of Illinois, having succeeded the Republican Dan Rutherford in January 2015.

The flyer positions Frerichs as a candidate concerned about job security, education and environmental sustainability. A quote attributed to Barack Obama praises Frerichs as "one of the young leaders in Illinois" with a "deep commitment to this region." Obama and Frerichs held a rally in Danville in 2006 when Frerichs was first elected as State Senator. He won that election just so (500 votes).

This was the first campaign the contributor worked on. 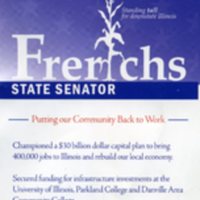 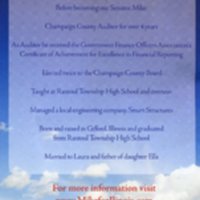