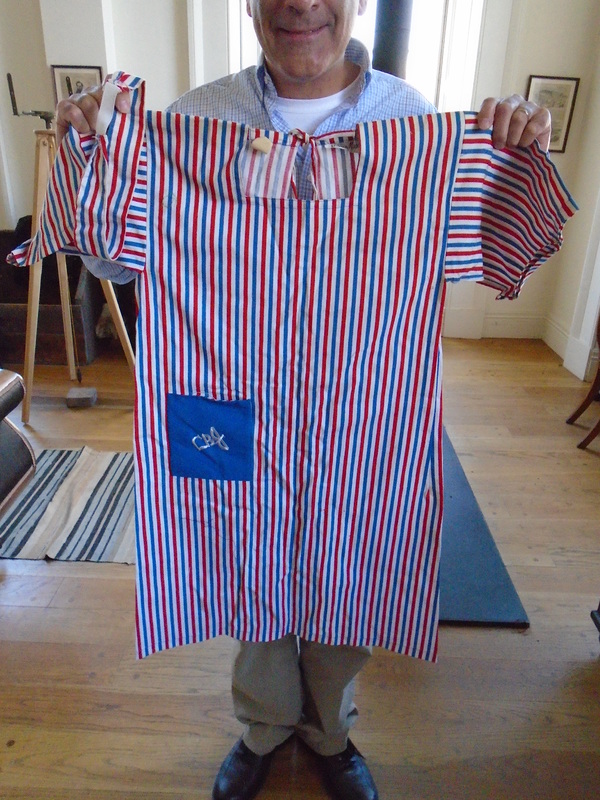 During the 1960 Presidential Campaign, Mrs. Kennedy together with Frank Allen designed a “Kennedy Girl” outfit that was produced and sold by Neiman Marcus. These campaign outfits were offered in red white and blue and were emblazoned with “Kennedy” and “Johnson” to be used as campaign paraphernalia. When Lyndon B. Johnson was running for his first full term as president in 1964, his wife, Lady Bird Johnson continued the tradition started by Jackie Kennedy.

The outfits designed for young adults were to be worn at the Democratic National Convention, held August 24th through the 27th in Atlantic City, New Jersey. The ensembles were intended for the Young Citizens for Johnson Club and consisted of red, white and blue striped jumpers over blue skirts and white blouses for the girls and white hats and vests like the jumpers for the boys. The dress shown is made of fabric composed of patriotic stripes, as well as a blue sew-on pocket embroidered with the initials “LBJ” for Lyndon B. Johnson, and the Neiman Marcus tag is visible on the inside of the collar. This particular item differs from descriptions of the Johnson campaign outfits at the time because it is made for a younger person while the jumper and vests are for young adults.

The result of the 1964 Presidential Election would see Lyndon B. Johnson retaining the presidency by one of the largest margins of votes seen in American election history. President Johnson successfully campaigned against Barry Goldwater, the conservative Republican Senator from Arizona, winning the election with 486 electoral votes to Goldwater’s 52. The strategy of the Johnson campaign was to promote the Great Society and anti-poverty measures against Goldwater’s conservative platform, enlisting the participation the Young Citizens for Johnson Club and the Young Democrats helped to emphasize Johnson’s plan to promote the Great Society and to support American citizens in need.