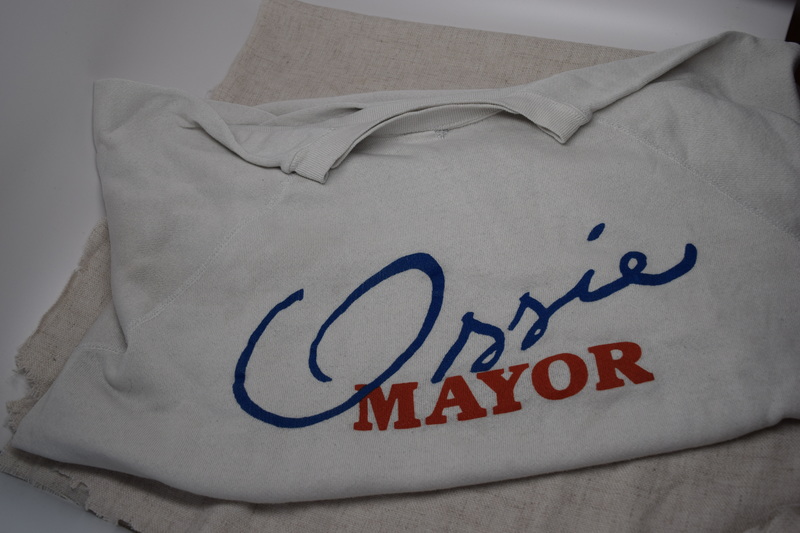 At left is a t-shirt supporting Ossie Langfedler's campaign for Mayor of Springfield. Ossie Langfelder served two terms as Springfield streets commissioner under the old commission form of government. In 1987, he was the first person elected mayor under the new mayor-aldermanic form. He was re-elected in 1991 and lost a bid for a third term in 1995.

Langfelder was born on Aug. 2, 1926, in Austria. His father, Otto, who was Jewish, and his mother, Ruth Marie, who was Lutheran, fled the family's Vienna home with Ossie and his sister, Edith, in March 1939, shortly after Adolf Hitler invaded Austria. The family settled first in Chicago and then moved to Springfield. Ossie Langfelder served in the Field Artillery in the South Pacific during World War II prior to serving in the occupation of Japan. He graduated from Springfield Junior College and studied Engineering at Purdue University.

Bob Church worked with Langfelder at an engineering firm and has been close to the Langfelder family ever since, he said. He helped with the campaign of former city Finance Commissioner Jim Dunham — Midge's late brother — and also helped Ossie Langfelder run for streets commissioner and mayor. Church then served as executive director of the mayor's office.

U.S. Sen. Dick Durbin, a Springfield Democrat, issued a statement following the passing of Ossie Langfelder in October, 2015 saying: "In a city of neighborhoods, Ossie Langfelder was everyone's favorite neighbor. He and Midge were the family down the block with 13 great kids in a busy, well-worn house. He loved his family, his local church, his home town of Springfield and the country that saved his life. His Austrian accent reminded us that Ossie was a World War II refugee who escaped to America and made it a better nation."