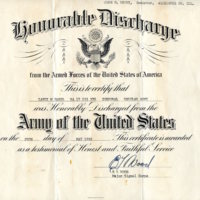 The Korean War began when, on June 25, 1950, North Korean soldiers crossed the 38th parallel marking the boundary between North and South Korea. This conflict between the Democratic People’s Republic of Korea, backed by the Soviet Union, and the Republic of Korea, which was a pro-Western republic, was the first in the Cold War. By July 1950, America joined the war, backing South Korea. After some initial back-forth along the border, the fighting stalled and casualties began to pile up. Fearing a larger war with Russia, China, or even a third World War, American officials frantically tried to negotiate peace with North Korea. In July 1953 the Korean War came to an end, after approximately 5 million soldiers and civilians lost their lives.*

Lanzy Meshew Baker was one who answered the call and joined the military at the age of 18 when he served in the Korean War. After three years of service he was honorably discharged. Originally born in Kentucky, but residing in from Thebes, Illinois at the time of enlistment Mr. Baker joined the Army in St. Louis, Missouri on October 21, 1948. He departed in San Francisco, California on February 10, 1949 and received a souvenir newspaper specifically distributed to those on the boat leaving the United States. The newspaper showed the expected days of travel and was to debark in Japan on February 23, 1949. The newspaper also included articles with political news in the United States and of a trial in the Philippines against Japanese soldiers charged with murdering 168 civilians in Luzon, Manila in 1945. While in Japan enroute to Korea Mr. Baker acquired a pamphlet with a picture of Jesus. He kept the picture in his helmet for the duration of his two years overseas. On May 29, 1952 he was discharged with honors, another type of benefit afforded to service members: eight military ribbons, an “Occupation Medal (Japan)”, and a “Korean Service Medal”.