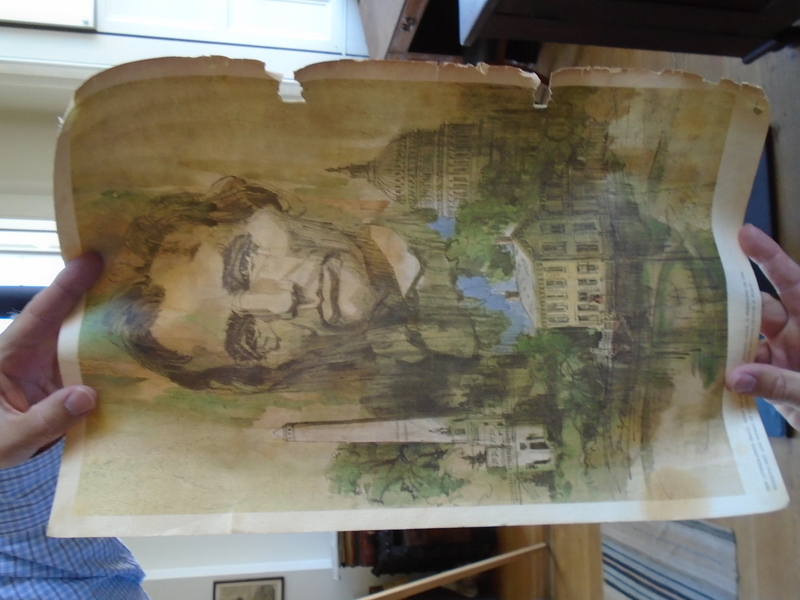 Grander in death than ever in life, Lincoln would come to serve as the very icon of The Republican Party, especially within the state of Illinois. The party itself originated in a meeting of anti-slavery Whigs at Ripon, Wisconsin on March 20, 1854. In Illinois, Lincoln and other former Whigs joined with a number of powerful political factions such as the Independent Democrats of Chicago at the Bloomington Convention, initially organizing at Major's Hall on May 29, 1856. Illinois Republicans would first convene in Decatur on May 9-10, 1860, and a second time a week later in Chicago, May 16-18, with Lincoln receiving a nod for the first of two presidential candidacies. Lincoln’s 1860 campaign ushered in the era of the professional politician within the United States. Large sums were spent to actively promote Lincoln and the three other candidates vying for the Presidency through a whirl of electioneering, press coverage, and the distribution of a quantity of campaign-related items ranging from the utilitarian to the absurd, some of which are featured within the exhibit.

Lincoln’s 1864 campaign was at the mercy of a brief split within the national Republican party; therefore, in order to foster an air of coherence, the main arm of the party instead labeled itself ‘The National Union Party’ by the first week of June, 1864. Campaign promotional objects had, however, become far more sophisticated or elaborate than during the 1860 campaign, since the Republican candidates of the newly-formed Union party had a great deal of opposition to defend against. There would be fewer items produced such as “Wide Awakes” lanterns or wooden “Rail Splitters” axes to incite paramilitary-like street campaigning in an already bellicose atmosphere, there instead being a focus on appealing to the individual, especially later in the campaign, through memory triggers such as ‘home, ‘freedom,’ and patriotism in order to calm and sway the vote. Thus pinbacks, tokens, ribbons, jugated cards, and other ephemera of 1864 often depict Lincoln and Johnson in a wedding of perhaps-not-so-opposites working together to preserve the Union. Though no single campaign anthem would dominate sales as had “Lincoln and Liberty Too” in 1860 – a plethora of tunes instead emerged in songsters or circulated in single copies.

Following assassination early into his second term, Lincoln would ascend as the icon not only of the Republican party, but arguably, of America itself. Not only would he be elevated to near-godlike status through the sociological tenets of Civil Religion, but his likeness and ideals – or those later alleged to have been his – became even more idealized and co-opted by nearly every sort of person or group imaginable in the nearly two hundred years since his death. In more recent years, he and his story have even been elevated to pop-culture icon status.

Though posters were not overly prevalent during either of Lincoln’s presidential campaigns, they are bulwark in any modern campaign arsenal. Given here are a few examples of these, standouts through depiction of Lincoln as icon within various election campaigns.

← Token of the Realm
Icon of a Nation →
Lincoln: The Icon