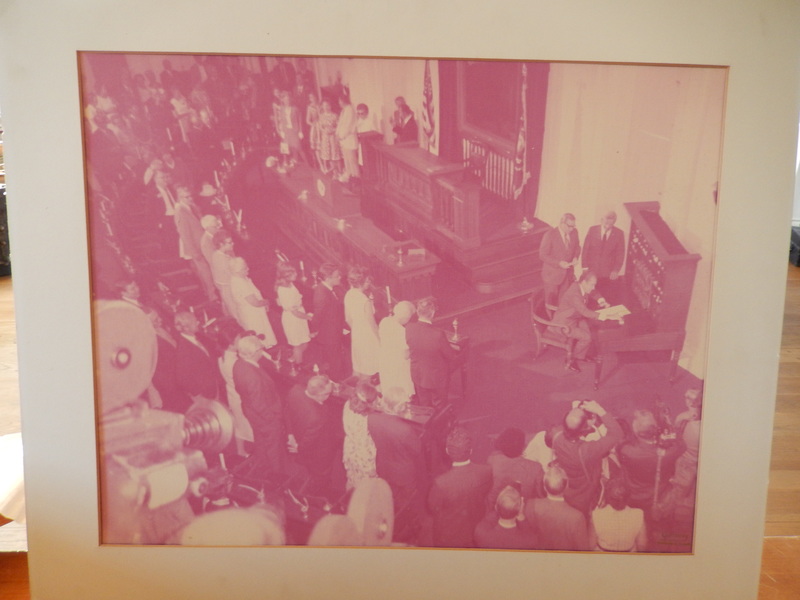 This photo was taken in 1971 at the Old State Capitol Building in Springfield. President Richard Nixon is signing H.R. 9798 authorizing the Abraham Lincoln Home National Historic Site. The same desk Nixon sat at was used by Lincoln “to write his first inaugural address.” The meaning of the photo to Nixon’s 1972 re-election bid was about vision and destiny; therefore, Nixon cites Lincoln’s belief during the Civil War that “the United States of America was man's last, best hope on earth.” How could Lincoln know that the United States would go on to be the strongest and richest nation in the world? Nixon asked. Nixon parallels Lincoln destiny to contemporary times when the country has achieved such greatness but also questions the need to reorganize trade and focus more on manufacturing in order to sustain its superpower status: “[Lincoln legacy]needs to revitalize in ourselves, in our young people, that sense of destiny that he had, and it needs that competitive spirit which he had in such enormous degree.” Despite the importance of the message, Nixon had hoped not only to use Lincoln to gain support for policy but also to improve his popularity with younger voters.