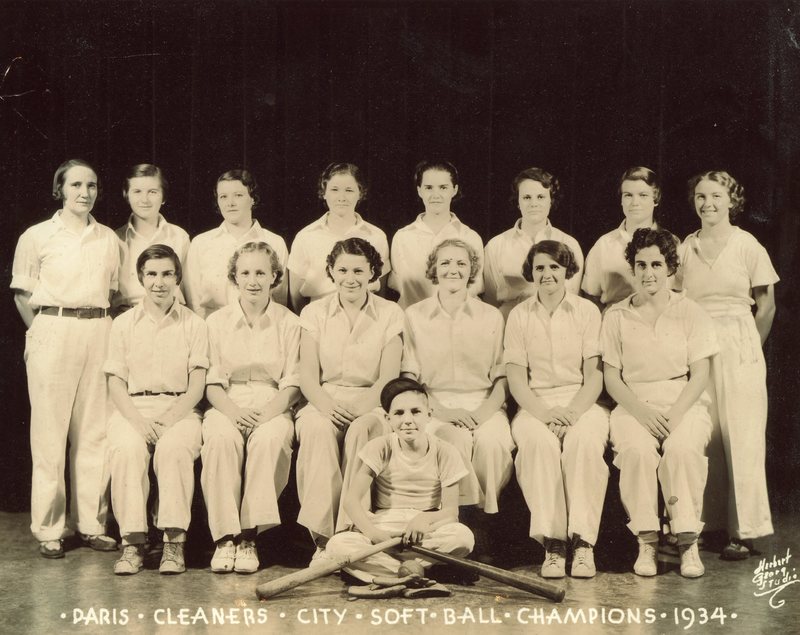 This riveting black and white photograph depicts the Paris Cleaners, a women’s softball team who won the Springfield-wide softball championship back in 1934.

Sports, such as baseball and softball, were popular among women during the nineteenth and twentieth centuries. From 1866 to 1935, women were involved in amatuer, semiprofessional, and professional baseball leaugues across the country. The invention of softball came in 1887, but it did not gain popularity until the 1930s, when the Amateur Softball Association (ASA) made the term “softball” official. [1]

Indeed, men and women both played softball throughout the turn of the century, yet softball eventually became distinguished from the “hardball” that was exclusively for men--a game that was more feminine than baseball because of the smaller diamond and softer ball.[2] Nevertheless, softball thrived in the 1930s. Businesses and factories jumped at the opportunity to organize and sponsor softball teams, as we see with the Paris Cleaners team in Springfield. During the Depression Era, softball was ideal to watch, as games were inexpensive and required less space than baseball. By the late 1930s, the United States had an estimated 92,545 softball teams, with around 60 million people who watched softball in 1939--10 million more than baseball. [3]

This item in the collection comes from Gabrielle Antonacci, whose grandmother, Mary Martin, is seen third from the left at the top of the photograph.